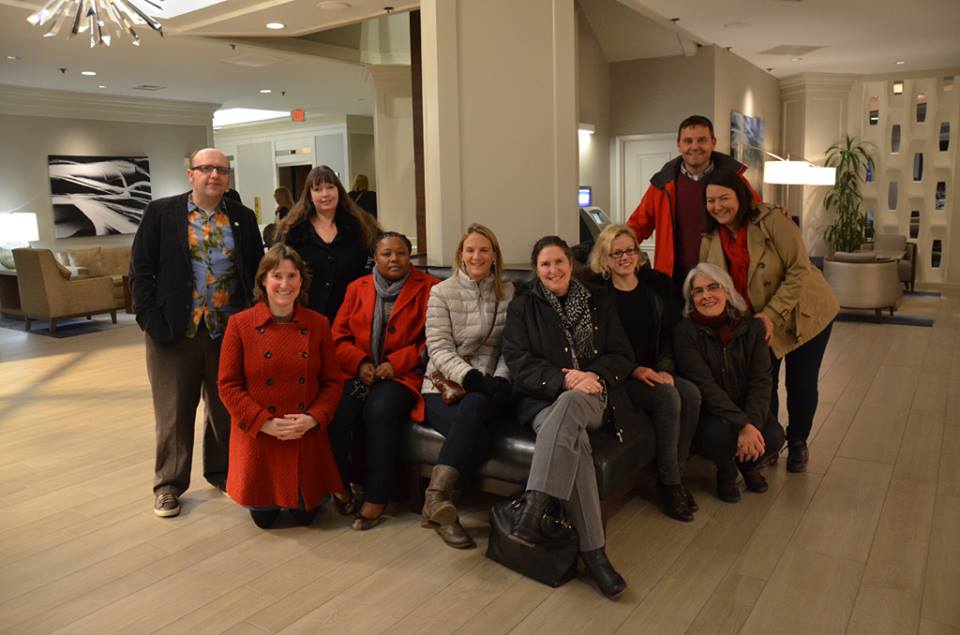 ROER4D at the 3rd GO-GN Workshop
The Global OER Graduate Network (GO-GN), which met on 17 and 18 November for a PhD seminar preceding the OpenEd 2014 Conference, is the brainchild of Prof Fred Mulder, former Rector of the Open Universiteit in the Netherlands from 2000 to 2010 and currently UNESCO/ICDE Chair in OER at the Open Universiteit in the Netherlands. Although recently retired, Prof Mulder will still play an active role in GO-GN and continues to be part of the Advisory Group of ROER4D.

Of the 6 supervisors (Fred Mulder, Cheryl Hodgkinson-Williams, Kassimu Nihuka, David Adewumi, Jane-Frances Agbu, Covadonga Rodrigo) and 17 PhD students who attended the GO-GN Workshop 4 are members of the ROER4D Project. Cheryl Hodgkinson-Williams is the supervisor of Glenda Cox (Sub-Project 4) and Fred Mulder is the supervisor of Judith Pete (Sub-Project 2). Glenda Cox provided a very comprehensive overview of her PhD study as a trial run for the conference, as did Judith Pete who included a comparison of her PhD survey data with some of the pilot study results from Sub-Project 2.

ROER4D at the OpenEd 2014 Conference
The theme of the conference was “Achieving the Potential of Open” and many presentations addressed to the concept of “openness” directly, including the presentation, “Openness Paradigm, a necessary reflection for the future education policies in Latin America”.

Based on the SlideShare views (over 600 in the first 5 days), Twitter feedback and face-to-face discussions, Cheryl’s presentation has sparked discussion about the challenges and benefits of researching in the open. The most common question posed was about “Septentrionalism” the term Cheryl used at the insistence of ROER4D researcher, Henry Trotter, to describe the “northern-centricity” of much of the OER research and the need to encourage more OER contributions and OER research from the Global South. Amalia Toledo and Carolina Botero are researchers in the ROER4D Sub-Project 12 and are assisting us to understand what evidence needs to be provided to establish if OER can indeed reduce educational expenditure in the Global South as many OER pundits claim.

Glenda Cox presented initial findings from her PhD study, “Understanding the interplay between open culture, institutional structure and academic agency in lecturers’ contribution and non-contribution of Open Educational Resources: A social realist approach” to great acclaim. A number of people were taken with the use of Margaret Archer’s Social Realism as a way of understanding why some academics in similar contexts choose to use and contribute OER or not. Judith Pete from the Tangaza College of Catholic University of Eastern Africa presented a re-worked version of her GO-GN presentation, “Influence of OER in increasing Entry to University Education among the Marginalized Communities in Kenya” that showcased some interesting differences between her PhD survey data from Kenya and the pilot survey data from ROER4D Sub-Project 2.

Although not presenting this time, Carolina Botero (Sub-Project 12) and Batbold Zagdragchaa (Sub-Project 8) were there to soak up all things “open” and Carolina Rossini (ROER4D Advisory Group) attended to support keynote speaker, John Wilbanks, who happens to be her husband! John Wilbanks’ keynote is well worth watching.

ROER4D preparation for the 1st ROER4D Workshop for the Impact Studies group
Cheryl made use of her time in Arlington to meet with Dr Rob Farrow of the new report at the OpenEd2014 Conference.

OpenEd 2015
OpenEd 2015 is scheduled to return to Vancouver next year, so with the Open Education Gobal Conference slated for Banff on April 2015, it would seem that Canada is the place to be for open education conferences!